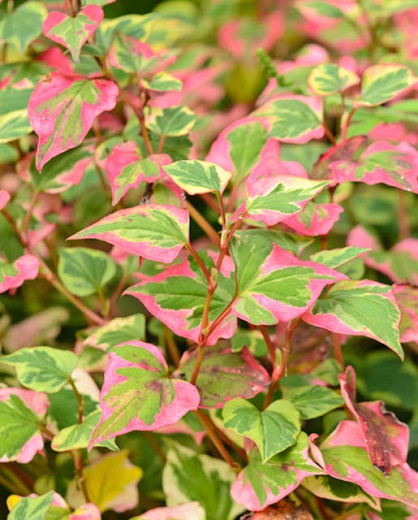 Height : 60 cm Origin: India Chameleon Plant is a herbaceous perennial plant growing to between 20 and 80 cm. The proximal part of the stem is trailing and produces adventitious roots, while the distal part of the stem grows vertically. The leaves are alternate, broadly heart-shaped, 4-9 cm long and 3-8 cm broad. Flowers, growing usually in summer, are greenish-yellow, borne on a terminal spike 2-3 cm long with 4-6 large white petal-like bracts. It is grown as a leaf vegetable, particularly in Vietnam, and is used as a fresh herbal garnish. The leaf has an unusual taste that is often described as ‘fishy’ (earning it the nickname “fish mint”), so it is not enjoyed as universally as basil, mint, or other more commonly used herbs. In NE India, particularly Meghalaya, it is locally known as ja mardoh and used in salads or cooked with other vegetables. In Manipur, it is known as toningkok and used as garnish over eromba and singju, ethnic side dishes. In Assam (Assamese) it is called Masunduri and popular mostly among the tribes. It is taken raw as salad and cooked along with fish as fish curry. Chameleon Plant is found in the Himalayas at altitudes up to 2500 m.